Unfortunately we were only 3 All Terrainers to participate to the run in Bruges this year since the date was inconveniently in the middle of the exams. Tom represented All Terrain for the 10km individual while Bram and I went for the 10km couple.

In some other runs, the first part of the run is easy for everybody until the route splits into the short or long version. This organization usually reserves several tough obstacles in a row after the split for the longer route. Unlike those runs where you can really experience a difference in level after the split, the level is more even during the run in Bruges because it has different obstacles at the same location: If you are running in the competition category you have to do this obstacle, in recreational individual that one, in team or couple the other one. The downside is that when you are arriving at a very cool-looking obstacle, sometimes you are being told that it is not for your category. Good news though, you can always go for the tougher obstacle if you want more challenge (or do both the easy one and the more difficult). For example at some point to cross a big river there was a huge net going up and then down for the easiest categories (that I was supposed to take), or a very long monkey-hang combined with traverse ropes for the others. As there was a bit of queue for the net I decided to go for the monkey hang + traverse, and there was no problem with that, the volunteers there really don’t mind.

At Bruges they sure like water obstacles even if it is cold outside. And with water obstacles I mean not only the obstacles you have to go over or jump over the water (too bad for you if you fell in it), but also a couple of times obstacles were you had to go into the water, and sometimes quite deeply (and this is not only because I am small!). Of course those wet obstacles are nicely divided along the route, so that when you start feeling your shoes somewhat dry again you have to go into water another time… But as if they knew they were mean, they also reward you nicely at the pause stands with not only (sport) water and fruits, but also with all sorts of cakes and waffles. I knew they were famous for this, now I understand why! But for not being too cold and not thinking about being wet, the best is still to keep running. And this was no problem since I cannot remember having to wait very long at any obstacles, which is enjoyable. Another thing, I sure remember a lot of volunteers and supporters along the way, also nice!

About the obstacles themselves, I found them generally a bit too easy in my category, but as said before it was possible to do some more difficult obstacles from tougher categories. I also regret that they didn’t have many combinations. On the other hand, they have some original obstacles, like monkey bars that you have to traverse with two ropes + hooks: you place the first hook on the first bar, make a footknot and place the second hook on the second bar before moving your footknot and start over. There was also one bridge from which we would go down via a rope until a horizontal beam just above the water. Not too demanding for your muscles but it does require some balance to avoid the water. However a look at last year’s photo makes me believe that the obstacles were mostly the same last year, so it could be that they would have the same again next year. If I go there again I would personally prefer different obstacles, but some people don’t mind. We also had to carry a log for about a kilometer! When I saw an obstacle from far away I thought I could happily ditch my log, but after doing the obstacle (and the following 4) we had to take back our beloved log and keep going until we eventually had to chop it with an axe. The chopping being towards the end (and the axe not that sharp) made it a bit more challenging. 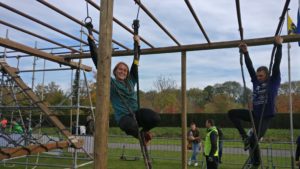 As a conclusion, I would recommend going to the run in Bruges! If you are looking for some challenge you should definitely go for more than the 10km recreational. They have a 10km competition with more or more difficult obstacles, and a 20km (you are doing 2 loops). If you are beginning, the group or couple run is completely doable to you as you’ll be able to help each other. In fact I ran quite some time together with another couple in which one participant was doing the obstacle double if the second one could not do it, apparently Belgium people allow that! With Tom we felt like the level was not that high in recreational categories. To give you an idea, Tom finished 7th out of 57 and I finished 24th out of 98. My personal experience was a bit tougher than expected since I lost my partner from the beginning of the run (Bram got injured), I got shocked by an electrical fence, and somebody stole my woman log so I had to carry (alone) a man’s log. Yet I had fun, and if I have the chance I will probably go again next year. It is quite far away from Eindhoven but we had the afternoon free to have lunch in Bruges and visit the brewery 😉