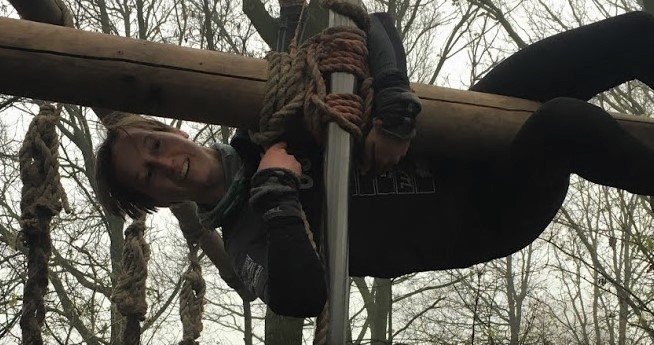 Like every year, the Dinxperloop survivalrun is the final obstacle in the way of my lazy winter break, as it is for a lot of All Terrainers.
This year we had a big group of 23 AT’ers attempting the course, all trying the more difficult 7k variant. The Dinxperloop is quite well respected
among the more veteran All Terrainers, due to its high focus on combinations and the gruesome final 2 kilometers.
For me personally, the run is a great way to check my progress; two years ago I failed miserabily to complete the full 7k, but last year and this year I have tangible progression in my finish times.

This year, although a lot of the parcours closely resembled last year’s, they added some new exciting obstacles. A personal gripe from the course last year was that the first 5k where almost laughably easy compared to the last 2k. Well this is still somewhat true, obstacles like the wooden fence-complex were a nice challenge before the real challenge started. Most of the obstacles were returning classics however. Small rope traverse and weak rope swing-overs are demanding obstacles in their own right, but sticking them in the last 2k basically ensures that a lot of exhausted runners are condensed in low amounts of space. This is not that much of an issue, since for every obstacle the organisation seems to have 3 set-ups, which makes it easier to flow through the masses. Still, stuffing the end with all these obstacles creates the obvious disadvantages talked about; it causes jams and
it makes the first 5k less interesting. Although I wouldn’t want every run to have these features, it kind of differentiates the Dinxperloop and therefore it works in its favor to create a memorable survival run.

A less welcome obstacle from previous years was also back: the cold. The freezing wheather definitely does not make survival running easier, and for the first 2 kilometers my hands were incapable of doing anything. It is definitely not a bad idea to make sure your hands (and the rest of your body) are all warmed up before starting. Luckily, I saw some familar faces during my run, which gives immediate motivation to push through the cold. In survival-running, there is definitely a ‘the more the merrier’ mentality. It joys me to see other AT’ers overcoming obstacles, but watching somebody like Laurence
crumble in front of me really also invigorates me.

I have been talking a lot about difficulty already and I definitely believe that is one of the harder recreational KSR-distances. The run gave a good indication that the training groups  are quite accurately put together at the moment; A-members generally managed to finish with band and T-members generally didn’t. Still a lot of the AT’ers with less experience put up a good fight and most of them weren’t to far off from completing the course. The trainee group seems really good at the moment and I think this will only improve. I gave the race a difficulty of T2, because I think if you are doing well in the Trainee group, you definitely have a fair shot at completing the Dinxperloop or at having loads of fun without being completely overwhelmed.

I highly recommend the Dinxperloop for anyone interested. The run oozes survival-running more than most of its competitors. Plus, the transportation is provided by All Terrain and you are guarenteed quality company, since the Dinxperloop will always be popular among All Terrainers. 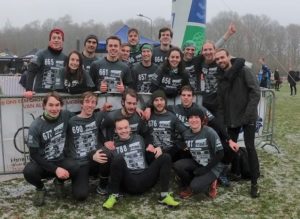