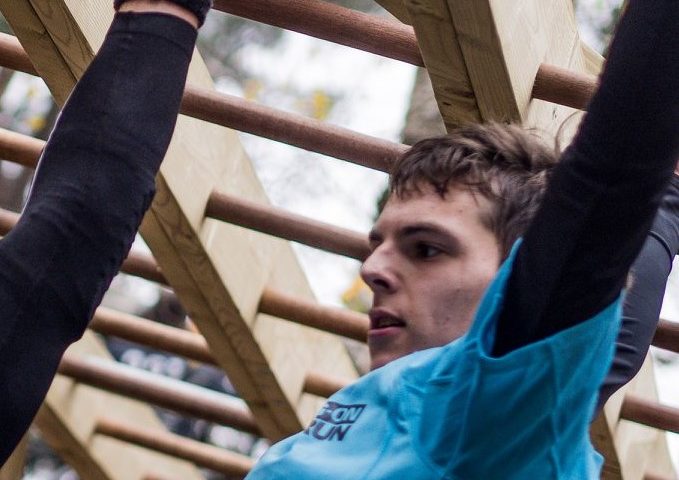 The Hang-on run, with a whopping 2500 participants, is one of the largest survivalruns out there. After hearing some spoilers from the All Terrainers whom visited the 8KM and 6KM on Saturday, I headed over to Doorn on Sunday to attempt the 13KM run.  Accompanied by Jesse and Daniel whom participated in the 8KM run on Sunday. Before digging in to the obstacles itself, I’d like to compliment Hang-On for their fabulous volunteers. Starting at the parking lot, up until the showers after the run, everywhere there were enthusiastic volunteers to help you have a great day. Besides just telling you what to do and where to go, the volunteers at the obstacles also tried to cheer on participants to finish the obstacles.

Having said that, lets move on to the run itself. Since many of the obstacles were part of Hang-On’s fixed obstacle course, the run was built up out of longer stretches of running combined with groups of multiple obstacles. The obstacles started off easy, however that ended quickly once I was handed a sandbag. The bag had to be carried over a long lap through the sandy hills of Doorn followed by a relatively easy obstacle. After freeing myself from the sandbag, I was able to continue my run on to the first set of serious obstacles, or so I thought. The first group of obstacles consisted of many different types of swing overs. However, I was surprised to hear that on most of them I only had to touch the top beam instead of going over it. Of course that didn’t stop me from going over it anyways, but it doesn’t feel like a real challenge if you know there’s an easy way out.

Further on in the run I was treated with some nice combination obstacles. The run really lived up to its name with various different combinations which required you to hang on your arms. Extra long monkeybars, wooden shoes, rings, flying monkey bars, a ninja rig, you name it, they had it. A new obstacle this year, was the lego combination, a traversal obstacle made up out of huge lego styled blocks. The cool part is that these blocks actually came from the Denmark after they were used at the European OCR Championships.

Of course, the run wouldn’t be a survivalrun without some traditional survivalrun elements, such as a long monkeyhang or a swingover in the water. Both which were present in the last set of obstacles. I was glad the part where I had to enter the water was late in the run, since the water temperature was very low.

Overall the Hang-On run is a very nice run with a nice scenery, high quality obstacles and great volunteers. However, if you are like me and need to be challenged I recommend joining the MSR or KSR categories instead of the recreational categories. (Or just bring someone along whom tells you to make the obstacles more difficult than they actually are ;))

Because I was obviously too scared to run the 13k of the Hang-on run this year, I decided to participate in the category that wasn’t full yet on the Sunday. This 8 kilometer run is new to Hang-on and advertised to be full of 13k (more difficult) obstacles, but with a lot less running. This excited me a great deal, as the act of running is generally not my cup of tea.

Last year, I joined the 8k survival run in Doorn on Saturday and I really entertained myself with the (for me then) though muscle-dependent obstacles. The run definitely has a muscle over brain mentality, which relies less on technique and more on pure power. Personally, I do really enjoy this, as it gives the run an unique identity, which a lot of other runs lack. The run is definitely a lot different than for example the Dinxperloop, which is often soon after.

Due to some solid training at All Terrain headquarters, some obstacles that would have given me trouble earlier, no longer pose a threat. Therefore I really hoped that these new obstacles in this ‘new’ run would really test my limits, since ideally it would be a marathon of though MSR obstacles. This did not pan out quite as expected, a lot of the obstacles I encountered I had seen one year prior, and I did not have to complete them in a more challenging method than before really. To my dismay, they still are one of the few runs I participate in where needing to touch a beam instead of going over it is more rule than exception. Also, some obstacles (like the aforementioned lego-obstacle in Justin’s Review) was deemed too hard for silly 8k-ers, and I saw that they made the hardest obstacle of last year (a horizontal salmon-ladder of sorts) a bit easier.

Still, the run did test my physical strength. Hang-on seems to love throwing heavy sandbags or logs in your face, which you have to carry long distances. Also, a lot of obstacles are terrain only traversable on your arms. I would therefore give this run a T2 rating with a bit of asterisk, the technique required to complete this run is already mastered if you manage to though out the T-trainings, however you do need a fair amount of arm-strength to complete the course.

I would say this run is a next step up for people that generally find normal 7k/8k runs hard, but achievable, as this run is definitely a bit harder than the average KSR distance run. However, if you are a confident Advanced member, the 13k probably feels like a more complete run with a little more variety.

A few bad things of the 8k would be the lack of difficult combinations, the fact that a lot of obstacles are stacked together and especially the prank they pulled in the run where you had to do a couple of swing-overs in 40C water, grrrrrr (but I heard none of the distances managed to avoid this). However I think the run makes up for that because of the sheer amount of unique obstacles (even if they all focus on the same muscle group).

A lot of Justin’s review about the 13k Hangon run also hold for this slightly easier category, so I won’t bore you for much longer, but I would also like to shout out the volunteers of the Hangon run, they seem excited to be there and it feels super nice to get cheered on by them, especially by the kids. Next year I am probably going to run the 13k or even the 21k in Doorn. If you have time by then, pick a (for you) challenging distance and I am certain you will have a good time. Doorn is relatively close by and it is always a blast (just try to sometimes ignore volunteers when they tell you only to touch the beam :o). Hope to see you there next year!