The run in Udenhout, a place just north of Tilburg, was excellent this year and a great way to start the season. Along with the 7 kilometers KSR I ran together with Sven and Tom, the organization made sure there was also room for a 5.5k rookie run and a difficult MSR and LSR the day after. The course was pretty though for a 7 kilometer run, which included some mean combinations of monkey hangs, net climbs, traverses (travelling around a rope on only your arms) and more. Luckily the organization managed to spread these big hurdles evenly over the course (unlike some other runs that stick all their big guns at the end). There was also no shortage of rest posts, with volunteers almost showering you in bananas.

In my opinion, the highlights of this run were the swing obstacles, which although not the hardest, were lots of simple fun, and something I really miss in other survival runs. Two combinations had you swinging with a rope and a trapeze bar to a monkeyhang rope and a net respectively. In the latter case, you also had the pleasure of going through a wall of water. However, the main attraction of the show was the combination where one had to climb to, up, over and under a ten meter high roof net, swinging back with a big Tarzan swing from one side to the other, and climbing back out with another monkey hang. Overcoming this obstacle was a lot of fun, but not nearly as fun as seeing your friend (i.e. Sven) falling in the water below after failing to hold on after the swing. 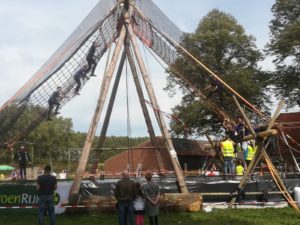 The run definitely required some dumb arm strength, having you traverse a couple of ropes. Still, it wasn’t that bad, as the feared short ropes, short vertical sticks, or similar muscle-crushers did not find themselves among the obstacles. If you want to decide if you want to do the 7k KSR difficulty in 2019, decide if you feel comfortable with the survival run elements present in our construction, because with a good understanding of the fundamentals of monkeyhangs, swingovers over beams, ringswings, etcetera are enough to complete the course and have fun while doing it.

I have few negative things I can say about the run. The obstacle where one had to throw a rock against a barrel or run a penalty lap is a bit boring and overused in my opinion. I’d would rather axe some wood, or shoot an arrow two meters next to the target. Also, it didn’t have many obstacles which I did not see before in some other runs (but that’s understandable for me). I also like to swing even more and have more obstacles just using my arms (that is personal preference, but I never said my reviews aren’t biased).

I love running in these relatively small villages, as the whole town get involved to cheer you on. The environment, although nothing special, was really nice. It is also a bonus that the run is only a 30 minute drive from Eindhoven. I loved the run and I can highly recommend it for everyone that wants to try it next time. It was my favorite run this year so far x). I hope to be back next year, with more All Terrainers than ever. Hope to see you all in Enschede for the Tartaros run!

[…] Back on topic, I will be doing reviews of the runs I will be doing the coming year, but I will also ask others to do some work for me when I get the chance, to get another perspective. With the reviews we will create we can help future All Terrainers in deciding which runs they want to do and which difficulty they want to overcome (since difficulty remains roughly the same for runs over the years). Obviously if there are questions now about upcoming runs and their difficulty/fun factor, you can always just ask somebody experienced (like Justin or me), who might be able to tell you all about it. Without further ado, let’s check out, what Udenhout is all about: https://allterrain.nl/review-survivalrun-udenhout/ […]