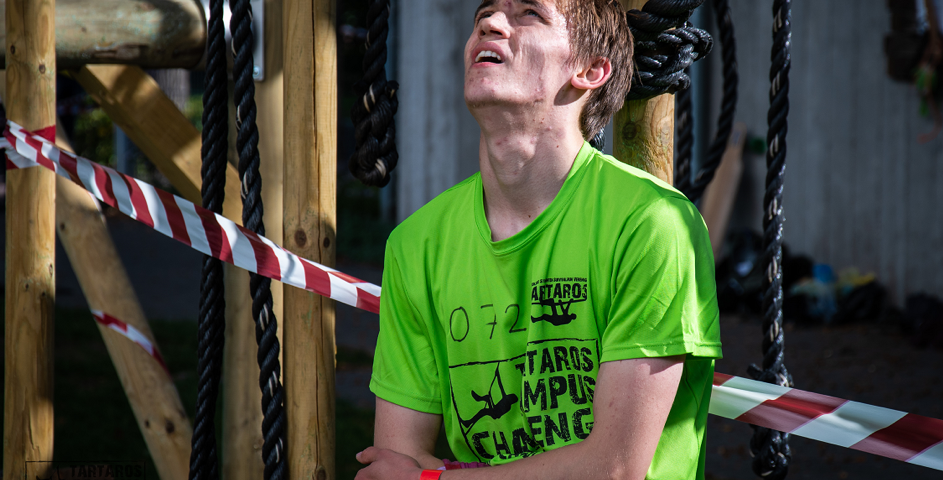 On a surprisingly sunny day at the end of September, we travelled with a rather large group from AT to the TU campus in Enschede. A nice mix of experienced and less experienced All Terrainers showed their mettle on the 5k Rookie run (if it was too easy, try to aim a bit higher next time boys and girls ;), but I am not about that 5k-life, so I am only commenting on the 8k portion of the survivalrun. If you want to know how we (or more specifically: Bram) experienced the 5k run, read his review down below.

This was not the first run organized by a student survival association for me and most of the time, these kind of runs have some similar traits. Because the set-up and organization of these types of runs has to be done by students (and as we know, students have a busy life), it is hard to expect a lot of large constructions (for difficult combinations) or a high average survivalrunner-quality, especially for the 5k, (these runs are also in large part for students learning about the sport), which could lead to some long waiting times. Waiting times at the start of the day were not so much the case, but once the groups started showing up, some people got more breaks than what they had bargained for. Obviously, for the 8k this was much less the case, then what I saw for its 5k counterpart.

I started the run together with Bart and Laurence, competing for a good time. While I was running, I was positively surprised that some of the obstacles you were expected to do, were pretty tough (this meant that some weak guy like Laurence would evidently fall behind). This was especially apparent after the road split between the 8k route and the 5k route, where you were treated to ten pretty though obstacles in a row. These obstacles would vary between advanced swingovers (f.e. swingovers while bringing a tire with you or a swingover where the rope would start at 1.5 meters in the air), some arm-airobics (f.e. traversing ropes, cart wheels or short sticks), large climbing poles and more. 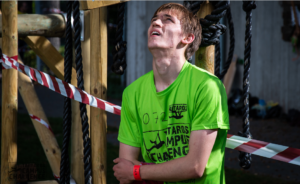 With this large density of rather straining obstacles, doing the route fast was rather tiring. However individually, the obstacles were not nearly as though as some others that I have encountered in other runs. This means that if you are inexperienced, you will probably have to take on the obstacles one at a time, but eventually it is quite possible to succeed in completing the course if you have some basic techniques and arm strength at your disposal. If you are in the Trainee group, the course is definitely going to be hard, but with enough determination, you just might make it. If you are training with the Advanced group regularly, the course should be doable. Therefore I estimate this course difficulty as T3.

I definitely had a lot of fun during the run and after the run (in part due to so many AT’ers showing up). The route was primarily through the woods at the TU campus and there were a lot of different obstacles. I really liked the difficulties I was faced with at the extra 3 kilometer, however the rest of the course was not nearly as challenging and I feel there could have been made more of an effort to make the 8k though course more though the whole way through. I feel that the parcours was too easy for the first four kilometers, which is understandable (as these kilometers are also ran by the 5k runners), and there are runs that do a better job integrating some hard obstacles in these parts. Also, the run was less of an ‘event’ than what I am used to seeing from the similar survivalrun ‘The SurvivalStrijd’ in Delft. The campus felt less ‘alive’. Most of the time, you were in some random forest. Survival association ‘Slopend’ in Delft makes sure that there is food, hot tubs and some kind of survival ‘community’ feeling. Obviously I don’t hold this against Tartaros (Slopend is also a lot bigger), I just criticize everything I can even remotely explain (otherwise I would have to give every run excellent grades). The lack of combinations were also a bit disappointing, but in the same vain, not a deal-breaker. I think the Tartaros campus challenge was, as well as nearly every survival run, very fun and very worthwhile. However I think there are survivalruns that do similar things a bit better.

The run is very fun and for everyone, whose fingers are itching again after a long summer break, the run is definitely worth the time (especially if you hover between being a trainee and an advanced member) and I would very much recommend it. However, the run is very far away and if you are choosing between this one and for example the one in Udenhout (which is just a little earlier than Tartaros most of the time), I would choose for Udenhout.

After almost two hours of driving we arrived at the University of Twente in Enchede. This is where our sister student survival run association DSSV Tartaros organized the Tartaros Campus Challenge. Packed with a van full of people and even an extra car we used more then a full starting slot, which is a noteworthy achievement. For the obstacles that could be found in the 5km version. They were mostly not that hard, which made it a good run for rookies. The usual beginner obstacles where there to give you some good feeling of survival running like a mud trench, a net where you have to go under and some pallets over a river where you have to run over. They also had some fun combination obstacles that were a bit more challenging. The first one being their construction, here you needed to go from one end to the other using some monkey bars, a balancing beam and some ropes. This was a bit challenging but doable for the rookies since you could help each other. The second consisted of a beam ladder, a horizontal net and then you had a nice choice where you could go down with another beam ladder or you could do some nice distance of monkey hang. The monkey hang was actually meant for the tougher categories, but make for a nice opportunity to increase the difficulty of the 5km by a bit. The final obstacle was also a combination obstacle, this consisted of a monkey bar, a pirate beam, a horizontal net and finished with some sort of weird tampon thing. The latter was rather creative. It was made of a wooden pole that hung from a metal rod on which it could slide. The bottom of the wooden pole was wrapped with some soft foam and duct-tape. It required you to pull in the tampon thingy and then you could ride it to glory since it was the last thing to do before you would be able to ring the bell.