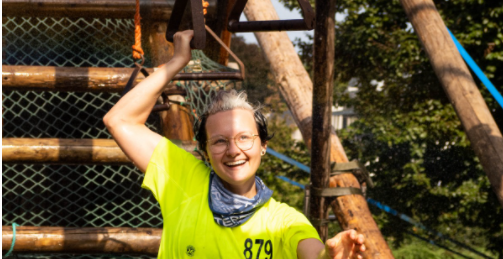 Finally! After so many months of enduring corona restrictions, we could finally go to a run with a nice delegation of AT’ers! This being my first real run, I teamed up with Carlo and Hilde to conquer all the obstacles Udenhout had in store for us. After some initial parking trouble, we arrived at the sunny gathering location where we could pick up our shirts and bracelets, and drop off our stuff. For new people, the bracelet is to show to the organization that you completed all obstacles if you still have it at the finish.
After a short warming up, all AT’ers in the duo run started in the same starting group, so we could all hype each other up before the starting sign! One of the first obstacles was an obstacle I knew I failed upon my first time running somewhere else than Eindhoven, but it went extremely smoothly. Starting to train twice a week really paid off! We had a nice pace going for these first obstacles and arrived at the first mega combi, “Bij Jan op d’n dam”, a mega swing over a pool. This was extremely cool to do, as we normally only do this once a year at AT over the Dommel. Directly thereafter, we had to monkey hang out of the pool, where I unfortunately made a mistake which resulted in me only succeeding the third time at the obstacle. While I made it with an intact bracelet, my upper arms felt like rocks haha. This ended up being a problem at the next obstacle with three swingovers, as my hand strength was completely gone. But after some resting and making friends with the “Bezemwagen” (the person who follows the last group), I succeeded. Thanks, Hilde and Carlo for being so enthusiastic and patient with me! Hereafter we had some easier obstacles, during which I regained my energy quite a lot. This however was of short duration, as the next combi tired me up completely, losing my strength in my arms completely. There I decided it was safer to skip the obstacle and I handed in my bracelet, but with great accomplishment that I made it so far! And this still leaves room for next year. I finished up the run trying as many obstacles as I could, and supported and cheered for the others too of course. I did want to try the final obstacle, but I still hadn’t regained the strength back so that did not result in success. It did however results in an awesome picture as shown below:)
All in all, I had a blast and it was very nice to experience the atmosphere of such a well-organized and fun event. Everyone was happy! Thanks again Carlo and Hilde for being awesome team members, and I hope to run many more runs in the future, improving bit by bit!
For any new(er) members that would like to join the Udenhout run, I think it was very suited for a first time run, as there we no real impossible obstacles, everything was very nicely built and it was clear what was expected at every obstacle. Thank you Udenhout for organizing such a well-arranged event!